From 1st June our showrooms will be back open. Place a £99 holding deposit to secure your chosen vehicle for 7 days.
Choose from various contactless delivery options. Check out how we’re keeping you safe right now!
Keeping You Safe Video
Reserve Any Car £99 - Keeping You Safe Video 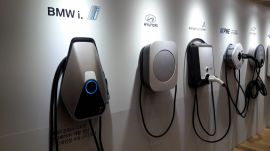 A small number of electric cars have been released on the market in the past 6 or 7 years including the popular Nissan Leaf, the fully electric BMW i3 and a range of hybrid vehicles including the Mitsubishi Outlander PHEV. However with the recent news that all new petrol and diesel cars will be banned in the UK from 2040, we will be seeing plenty more electric alternatives on the market. Volvo have already announced that all of their cars will be electric or hybrid from 2019 and BMW have two new all electric cars planned for release by 2020.

As well as the lack of tailpipe emissions when running on batteries, these vehicles are often almost silent when using batteries, and often have great acceleration at lower speeds due to the 'instant on' power that an electric motor can deliver.

e.g. BMW i3 (without Range Extender) and Tesla Model S

An electric vehicle (EV) is fully electric, powered exclusively by electricity. The vehicle is charged by an external electric charging unit or through regenerative braking. There is no backup energy source however depending on the car, they can normally travel around 100 miles on one charge.

Electric Vehicles are good for those who want to use electric power to make longer journeys, however don’t have huge commutes and are ideal for those who have electric charging points at work. They also have the least environmental impact of the three types.

Hybrid electric vehicles are powered by a combination of electricity and petrol. The electric energy is generated during driving by the car’s braking system. The car is filled with petrol or diesel as with a regular vehicle but will not require refilling as regularly as it will use electricity when possible.

Hybrid vehicles are good for those who travel on longer journeys and/or don’t have easy access to a charging point as most hybrid vehicles can not be plugged in to charge.

Plug in hybrid electric vehicles (PHEVs) are also powered by both petrol/diesel and electricity. They can charge the battery through regenerative braking as with the other types of electric vehicles but can also be plugged into an electric outlet to charge.

Plug in hybrids are perfect for those with an easily accessible power source such as an outdoor plug or garage with power. However, the charge will last a much shorter time than a fully electric car, often around 30 miles before the car needs to use regular fuel. These vehicles can often run in a variety of modes that the car automatically makes use of - either fully Electric, fully on fuel, or a combination. This means that when you need to accelerate to overtake, or go up a hill, the car and use the output from both the batteries and the internal combustion engine (ICE), but when driving at a constant speed, just the batteries can be used. If the batteries run flat, the ICE can charge the batteries whilst driving, whilst regenerative braking will top them up as you slow down or drive down hills. This means that the relatively short battery range doesn't restrict these vehicles from driving long distances, though of course the journey won't be 100% using the batteries. This type of vehicle is ideal for those with short commutes who can recharge regularly, but who also make longer journeys.

Despite the benefits of these vehicles, it's worth remembering that many traditional cars get comparable MPG values - for instance, the more efficient models of the BMW 3 series are capable of achieving over 60mpg (combined) on longer journeys whilst being in a low tax band.

Why not browse some of the hybrid and plug in hybrid cars we currently have in stock at Imperial Cars?


Back to all posts

Finance from £158 per month

Finance from £166 per month