To celebrate Imperial Car Supermarkets’ partnership with Northampton Town FC, we are pleased to announce a fantastic competition where you can join us and The Cobblers at Sixfields for the Notts County game on 2nd April 2016. 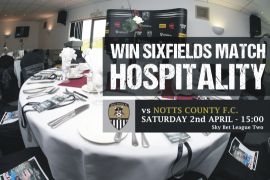 Three lucky winners will each receive a ‘Match Day Experience’ for two people which will include:
Access to the 1897 Suite
3 course pre-match meal as guests of Imperial Car Supermarkets
Match Day programme and team sheet
Pre-match stadium tour
Pitch side photograph with teams ahead of kick-off
Padded seating in West Stand
Tea & Coffee at half time
Plus...one lucky winner will also receive a framed signed match ball (the draw for this will be taken on the day)
To enter all you need to do is find Imperial Car Supermarket on Facebook and send us a direct message with your best guess for the stadium attendance for the Newport County game which takes place on March 25th.  The three entries closest to the actual attendance will (along with a friend of their choice) be our guests at the Notts County game on the 2nd April 2016 at Sixfields.