The 80’s, what were they all about eh? Having only been born on the tail end of the 80’s it is safe to say I missed it all… But that doesn’t mean I don’t share an appreciation for it. I often think I was born in the wrong era. The music, the fashion and the cars… What’s not to like?

The Clash, Madness, Blondie  – Pac Man, The personal computer – The non-stop glamour, Dr Martins, ruthless ambition the first launch of NASA’s Space Station… It was the decade that made us! Then there was the car that made history… The Audi Quattro ♥

The Audi Quattro rewrote the book on performance cars for me. The reason is simple, and can be summed up in a single, three-letter acronym – AWD. It was a car that made headlines in both road going and rally alike.

The road going version itself was a real head turner and stared in programmes such as Life On Mars  and Ashes To Ashes which stars Philip Glenister. Did you know Philip is rumoured to take up a spot as Top Gear presenter alongside Jodie Kidd and Guy Martin? 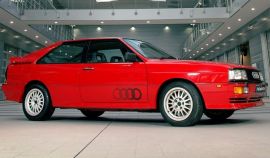 The bedroom pin-up was the first ‘real-world’ option to four-wheel drive and it provided Audi with the technological advantage that other manufacturers scrambled to copy. It gave the company a glamorous edge which members of the press likened to supercars from Ferrari, Lamborghini, Porsche and Lotus. Based loosely on the Audi 80, the Quattro was a beefed up version. The power came from a 2.1-litre 200bhp turbocharged five cylinder engine allowing for it to achieve speeds of 137 mph and a 0-60 time of just 7.3 seconds. With its capabilities proven on the gruelling stages of the WRC, Audi’s new driveline became a prominent feature on its road cars, offering superior grip no matter the conditions.

Then there was the Group B Rally monster and the hill climbing legend… This is where Audi really made their mark. The Audi Quattro S1 Pikes Peak car broke the unlimited hillclimb record in 1987 when it was driven to the summit by Walter Röhrl. The hillclimb car was lighter than the Group B rally car at a weight of 1000kg but had a staggering 598bhp which is still impressive by today’s figures. Although in today’s world it wouldn’t be able to keep up with the power and technology we now see, it still has what it takes to nip at their heels and rip up the mountain with ease.

Every so often, though, there’s that one car you can point to as a defining moment when everything changed. Sometimes, a car comes along that’s so radical, so revolutionary, that its influence reverberates well past its lifetime. The Audi Quattro is one such car. The Group B Rally car almost immediately proved its worth on the international rally scene when it first went into competition. Audi won the Manufacturer’s Championship title in 1982 and again in 1984, as well as winning the Driver’s Championship in 1983 and 1984. After the Quattro was unleashed onto the stage, rally racing soon veered heavily towards the implementation of AWD and never really looked back!